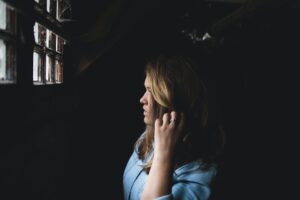 NO MORE Week 7th – 13th March 2021, is to raise awareness of domestic abuse and sexual violence. Inspiring individuals, organisations, and communities to make a change. During Lockdown, there has been a rise in domestic abuse. It can have detrimental effects on all members of the family.

It’s not just about violence towards women, men can suffer abuse at the hands of wives and children as well. Sometimes it’s about not being able to control a situation, and the focus of anger or stress is whoever is closest. At other times it’s about power over someone else. There can be many reasons for an individual to commit abuse, but it’s traumatic for the victim no matter what.

One example of abuse is a case I helped with was right at the start of my career. One woman in her 20s, Trudi, had been living with her boyfriend for about 8 months. He had moved in with her originally. At first, they seemed to rub along well. But over time he became demanding to know what she was doing at every moment. Eventually, she felt imprisoned and tried to break the relationship off.

He wouldn’t move out, and he locked her in a cupboard under the stairs when he went out. He’d take away her phone, so she couldn’t contact her family. One day, she was attempting to escape when he came back early and found her with her bags packed. He completely lost his temper and strangled Trudi. Thankfully, Trudi was extremely fit and could force him away and run away from the house as fast as possible. Once away, she called the Police and had him arrested.

She, however, kept having flashbacks to the strangling and as the time for his court case came closer, she experienced severe anxiety. A friend recommended her to me, and I could help her with the trauma using the Rewind technique. With the court case, she had spoken to the family liaison officer and could learn what would happen in court. This information I used in a visualisation where I had her imagine going through the entire process whilst in a deeply relaxed state. It helped enormously, and she could face her ex-partner in the courtroom and they convicted him.

Trudi had been very lucky, yet some women spend their lives being too frightened to leave and convict their partners. The abuse people can experience differs too. It can include physical violence, economic and financial abuse, online, psychological, coercive control and sexual abuse. Gaslighting – a term used to describe how the abuser lets the victim question their reality after they made a film in 1944 with that plotline.

You may be familiar with “Ask for ANI” which the Home Office launched last year. Where a victim uses the codeword ANI to ask for help, particularly if the abuser is keeping close guard over them. Pharmacies in Boots, Superdrug and Morrisons, and 100 independent pharmacies, have opened up safe spaces in their consultation rooms for victims of domestic abuse to access support.

Don’t suffer in silence – seek help – and if you’re still suffering from the trauma or have to face the abuser in court, then seek mental health support.