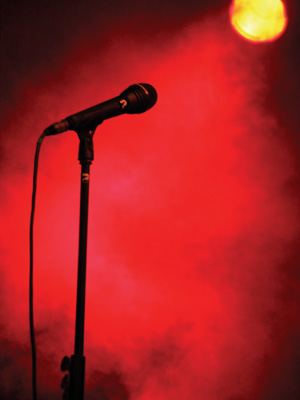 Public speaking fear is supposed to be one of the number one phobias human beings have, next to heights, snakes and spiders. The reason is that there are dozens or even hundreds of eyes looking at you, and from a predator-prey perspective, you are prey, ready to be pounced upon!

But all is not lost because lowering general anxiety can help you gain more control over your thoughts and reactions to the situation. When I see people for fear of public speaking, I use a mix of mindfulness, solution focus – for you to see what they want to achieve – hypnotherapy – to help relax and place you in the daydream state where you can go over the scenarios in a calm focused manner. This helps the mind feel safe doing presentations or talks. If thoughts are rather extreme then I can call some CBT into use, which can overcome the self-predicted disaster, which our minds are very good at creating.

I have a special program for public speaking fear, which covers:

When you are coming up to your public speaking engagement, don’t leave it too late. Many people think one session will be enough, but it’s much more effective if you can do at least 4 or 5 sessions or possibly more. So if you know you’re going to speak on a particular date, make sure you book sooner than later and make sure you get your message out and enjoy the day.

If it’s your first public engagement, we can bring in some extra tools to help you get it right, in the same way, sportsmen and women use filming to see where they need to improve. If your job depends on addressing large numbers of people then this program can help improve your confidence to do a better job.

Sally had been promoted at work and part of her new job was to do presentations in front of her colleagues. She came to me because her fear of public speaking caused her to a) Forget all the presentation and b) shake.

We spent 5 sessions over 4 weeks with the last session the day before her next presentation.

Using the rewind we scrambled the couple of bad experiences she’d previously had, and used visualisation to help her rehearse the next presentation without panicking.

She also put together a plan of rehearsal which also included her husband, so she could learn everything off by heart and he could make sure nothing was missed. When she had completed her presentation she sent me a card thanking me and said it had all gone to plan.

Steve was a project manager for an IT company and during the pandemic in 2021 was conducting all his meetings on Zoom. As time went by he became more and more panicky and couldn’t understand why things should suddenly change. It was making work life very difficult.

On approaching me, I wondered if there was a clash of values between him and the industry in which he worked. Over a period of 6 weeks I taught him many tools to use which prepare him for Zoom meetings. Using the hypnotherapy I helped him lower his general stress levels around his job. By session 3 he had realised that the company were making lots of cutbacks and he didn’t feel that they gave good customer service and it was this which was really worrying him, not the Zoom meeting. He decided to look for a new job.

By session 4, Steve had several interviews under his belt and told me that the hypnotherapy had helped enormously with his confidence levels around that.

At the last session he told me he had passed an interview and was starting his new job the week after. Success all round.

Here’s what he had to say about his experience…