Phagophobia – Fear of swallowing is quite common place. Some people experience a lump in their throat when trying to swallow food. Others fear that, if they eat or drink, they will choke to death. It’s a non-specific phobia which is often made worse by a person’s stress about the condition. As a result, it becomes a self-fulfilling prophecy as the more they anticipate their throats closing the more likely it is to happen.

Solution-focused hypnotherapy can help in a number of ways. Firstly it shows a person how to fully relax so they can feel every muscle letting go. Secondly, it helps change the subconscious response so that when a person is placed in a situation where they would normally have this reaction, the suggestion is to respond in a different way.

Fear of swallowing tablets and pills is a very common problem as it tends to trigger the gag reflex. If a person has to take a lot of medication then hypnotherapy can help them relax before taking their daily meds.

Before deciding to see a hypnotherapist it may be a good idea to see your GP to make sure you do not have an obstruction in the throat. 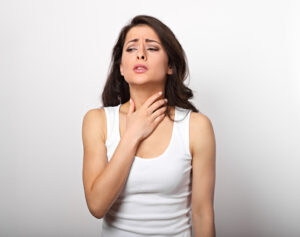 The first case of phagophobia I worked on was a really interesting case. A lady called Sharon had had a stroke and had been paralysed down her left-hand side. She was bed bound and was suffering from extreme pain. The extreme pain came from the brain death from the very centre of the brain, which produces dopamine and other chemicals that help regulate pain. She wasn’t able to take her medication either. The doctors though decided this was psychological so they tried to get her husband to find a way of getting her to take it.

Her husband decided to try hypnosis, and despite having not worked with a person with such severe brain loss before I explained that I would try but couldn’t guarantee success.

However, I needed not worry as after 3 sessions she was swallowing again. Sharon was able to take the medication, and have the operation she was waiting to have. As a postscript, I also found out that the part of the brain that controls swallowing had changed. She had MRI scans regularly, so the changes before and after impressed the doctors.

A young man called Alex who worked in the construction industry came to me to help him with a fear of swallowing. It was something he’d had for years. Over the past 3 weeks it had become so bad he wasn’t eating and was losing weight. His GP just gave him Gaviscon, but he knew it was more psychological. He also suffered emetophobia – fear of being sick, so the more he worried about it the worse the problem got.

At the initial consultation I gave him my CD and by session 1 he was feeling much better, scoring himself a 7/10. In that week he had eaten 2/3 of all the meals and he was feeling a lot more relaxed.

By the second session he was feeling more in control and wasn’t thinking about it so much. He’d had one blip after having a panic attack after drinking 7 vodka and Redbulls. I pointed out that Taurine found in Redbull was a high does caffeine so it mimics anxiety. No surprise he had a blip. I suggested he change his tipple. By session 3 he was having very little problem when going out with friends and colleagues.

It was coming up to Christmas and he was socialising a bit more than usual. In the end he was able to go out for a Christmas meal with colleagues and eat all the meal.

He was feeling a lot more relaxed in himself and at work. Because he was more relaxed at work, he found he was getting on better with colleagues and bosses.

After Christmas, he said he was managing to eat larger meals. As a result, he was able to get his weight back to where it should be for someone of that age and fitness. He also realised it happened more when he was tired. Consequently, he was making sure when he did go out on a Friday and Saturday evening he came home earlier and went to bed earlier. Some things were worth sacrificing to keep the anxiety at bay he told me.

Alex had achieved his goal in 5 weeks which delighted him.

Comparing two cases, one which worked well against one where little progress was made

As I have seen many times in my career, the success of therapy working is often down to our lifestyles and how we need to get away from chaotic lifestyles to a calmer balanced one. A great of example of this is comparing two clients who approached me pretty much at the same time. John and Hina.

John is 19 and a student in Manchester and because of the Covid pandemic has been spending most of his student life online at home in Wales. He was studying geophysics and found working from home difficult. His problem started when he nearly choked to death and found that afterwards he had serious trouble swallowing.

Hina too was a student, but she was she was also working in a hospital. It was an incredibly stressful time because of Covid. Her not being able to swallow came out of the blue. She was having a stressful time with relationships and parents and this was the culmination of three weeks of sleepless nights. She woke one morning not being able to eat anything other than ice cream.

Two similar situations, two incidences caused by stress. Both went to their GP and had scans done and nothing was found. Both underwent CBT and it hadn’t helped. Both felt powerless and unhappy.

John though carried on as normal after our consultation. He was having to finance his degree by working in a supermarket and the shifts were long and tiring. Hina, decided to halt her studies for a few months and her job and concentrate on getting better.

John started at a 5 on the scaling Hina 4. Whereas Hina took up meditation, went for long walks and experimented in what was easy to eat at the beginning, John carried on working long hours, going backwards and forwards to Manchester, seeing friends when possible and going to concerts. He did realise though that drinking alcohol made his anxiety much worse.

He also discovered that Yoga helped him unwind at night after his shift and that as well as the MP3 improved sleep. Hina found that limiting socialising to just one person at a time helped her feel calmer. Week after week John’s anxiety levels didn’t change much, some weeks were good, others not so much. By session 6 although he wanted to carry on, I did use Hina as an example of how he needs to really find ways of relaxing and not constantly test his anxiety.

Hina however made fantastic improvements. Each week she scaled herself higher and higher up the scale until she was a 9 by session 6. She was now going out and eating out normally with family. She was gaining some weight she’d previously lost and was also eating more healthily. She was carrying on her coursework and looking forward to finding a new job in the new year. She carried on with top up sessions because she found the hypnotherapy so effective. John however kept forgetting he had sessions booked and in the end we called it a day.

John’s hectic and chaotic lifestyle meant he never was able to fully switch off and practice all the tools and listen to the MP3. Hina on the other hand had the luxury of choice and made all the right choices for her.

So before you decide to seek out help for phagophobia, please make sure you have the time to commit and the ability to make changes in your life at least for the short term.

So to find out how I can help you with phagophobia call on 07508 658934 to arrange for a consultation or contact me.