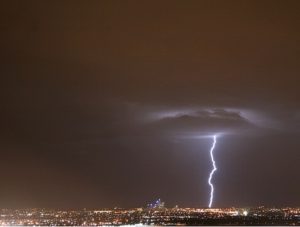 Astraphobia is a fear of Thunder and Lightning

Astraphobia usually starts in childhood. Often the loud thunder and the flashes of lightning are frightening especially if the child is outside. The majority of children grow out of this phobia as they get to adolescence.

Not everyone does though. Those who go on to suffer from it through adult life often do so because they associate it with other traumatic events, such as flying, or fires.

Sometimes, the behaviour of adults can make the phobia worse. All children need is reassurance that it’s ok, that it will pass. But if your parent tells you to “Man up” and “stop behaving like a baby”, it can reinforce negative thoughts about themselves.

Like many phobias, small amounts of exposure in a safe environment is all that is needed to allow the Amygdala in the brain to stop forcing you into a fight or flight mode. This can be problematic if thunderstorms go on for many hours.

As a therapist, I would usually perform the Rewind/Reframe on a client presenting with a phobia. Then  I would ask them to expose themselves to the stressor. But you cannot summon up thunderstorms at will, and not everyone has the ability to visualise.

Understanding how the brain works can help a client but sometimes I am forced to think outside the box.

Tony challenged me to help him with his fear of thunder and lightning. He’d been to other therapists who had tried CBT, Hypnosis, Rewind/Reframe and nothing had worked. He just couldn’t visualise and he had suppressed all his memories of reacting to thunderstorms. He needed to conquer this fear for once and for all. He’d just got himself a new job, which required him to travel to some of the most active areas of the world. He had a problem with flying as aircraft are hit by lightning quite frequently.

I gave it some thought as to how I could expose him to the storms. Whilst at the same time monitor him and suggest he was safe. I did say though that coming to see me at the beginning of May might prove difficult to give himself the chance to test the efficacy of the hypnotherapy. He was given my CD to listen to each night, and this helped his sleep improve as well.

The therapy used for astraphobia

First I taught him breathing techniques to help trigger the parasympathetic nervous system when in a storm. I helped anchor his safe place. Then set up a GSR meter, which reads the body’s stress response. I played the sound of the sea, whilst helping him imagine he was in a safe place. When the meter readings were as far reduced as he could get, I then played the sound of rain over the sea. I then turned off the sea. He was listening to the rain only. I then played him the soundtrack to a thunderstorm.

At first, the GDR meter readings shot up, but I was able to suggest he was in a very safe place and it was ok to be there. As we listened to the storm, slowly his responses to the claps of thunder declined. As well as assuring he was safe, I also assured him that he didn’t have to worry what other people thought of his fear. This was ingrained as his astraphobia had been laughed at by his peers at school every time there had been a storm.

The following week, we followed that same procedure. This time I asked him to watch a YouTube video of a storm. Again his stress levels went high with the first lightning strike. But became progressively lower as the clip was played with him anchoring the safe place.

Nature Obliged to join in.

Two days later we had a very unseasonal thunderstorm. In the UK, thunderstorms tend to happen more in July and August. A weather system being pushed up from France had crossed the channel. For the next 2 weeks, we experienced Thunder, lightning and floods. This was brilliant timing for us. Tony was able to use all the knowledge he’d gained from our initial consultation and use the tools I’d given him. He was able not only to endure the thunderstorms but actually reported he enjoyed driving with one going on around him.

After 5 sessions he told me he felt sure he was going to be alright. He was looking forward to starting his new job a week later.