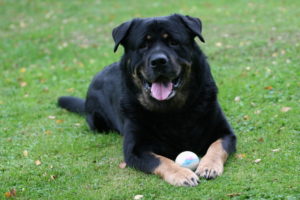 Cynophobia or fear of dogs is very common with children. Dogs are pack animals and look to humans quite often as the pack heads. If a human is looking scared, the dog can misinterpret this. It believes there is something the dog needs to watch for. Not realising the human is afraid of it.

Understanding dog behaviour can help a person work out what the dogs feel or think. Back in 2009, I spent an afternoon working with a dog psychologist understanding dog body language. I learnt how to interpret if a dog was looking happy and relaxed, or whether it was aggressive.

This information actually saved me from being attacked by dogs who thought I was an intruder when all I was doing was posting a letter. When I see clients for fear of dogs, I usually spend a little time each session going through dog behaviour as well as teaching relaxation tools you can use when in an area there are dogs.

Maddie came to see me about her fear of dogs or cynophobia. She was 38 years old and had developed the phobia over a lifetime. As a child, she had been bitten by a neighbour’s dog and this flashed into her mind when talking about dogs. She had recently moved in with her boyfriend who lived on a farm complex and there were sheepdogs. In the village, there were a lot of people with dogs and it was stopping her socialise.

She wanted to be able to just walk down the road and not think twice about a dog being taken for a walk.

Over a period of 4 sessions, she was able to learn about dogs and their behaviour. She learnt tools which helped refocus her anxiety and be able to leave the house. With the hypnotherapy and NLP techniques, she was able to overcome the fear and start being more sociable in the village.

Ellie aged 8 was brought to see me about her fear of dogs or cynophobia. Being so young a lot depended on her ability to focus, but it turned out, in the end, I need not worry, she was a model client. Her neighbours had dogs and her mother had to open the front door whilst Ellie stayed in the car before dashing up the path and into the house.

She couldn’t go out to the shops or to the park without screaming and jumping on her mother or father. Even school was a no-go area as the house next door had a large guard dog which barked as the children played in the playground.

Over a period of 6 sessions, she learnt all about how dogs look to us for cues. What a dog looks like when happy, and when it’s defensive. We scrambled the bad experiences she’d had and slowly each week gave her tasks to complete. Such as going into a cafe and talking to owners about their dogs. Finding the right dog to eventually stroke. By session 5 she had managed most of the tasks and was over the moon as were her parents. By session 6 she had stroked a neighbours dog and was planning on taking it out on walks.